To me, history is about people—their foibles, mishaps, and grand adventures. I hope you’ll enjoy learning these surprising and often fascinating stories.

See My Books Below
Click to Visit My Blog

A Life of Inspiration

Eliza de Feuillide seemed fascinating and outlandish to her cousins in rural eighteen-century England. When she visited their village, her appearance was electrifying. She was an attractive, accomplished French countess with a vivacious personality who inspired their imaginations and regaled them with stories of life in London and Paris where she hobnobbed with French nobility and wore the latest fashions.

One of these impressionable younger cousins was famed writer Jane Austen, who would find Eliza's stories so fascinating that she would incorporate elements of Eliza's life into some of the most legendary novels in English literature.

Yet Eliza's life was not as glamorous as Jane or her Austen cousins might have thought. She faced many tragedies in her life that wealth and social class could not protect her against. She was also forced to adapt and re-examine her priorities in a way that would dramatically change her life choices and result in a more sedate lifestyle. Read about the perseverance and courage of the real person behind several fictional characters in Jane Austen's writings and novels and the deeper connection Eliza had to the Austen family.

What if you were one of the most powerful men in the world and met a woman who could not be conquered? Such was Napoleon's dilemma in December 1797 when the renowned beauty and socialite Juliette Récamier entered his life.

At the very moment that he stood on a stage dressed in his green battle uniform, being acclaimed by an adoring crowd as a heroic victor, attention turned from him and focused on the stunning beauty. Upstaged, Napoleon fumed. But such was the undeniable power of Juliette.

Other incidents would pit the two against the other. He had political and military power. She had her own power, a power of charm, intelligence, and compassion. How would it end?

How did a young wax modeling apprentice named Marie Grasholtz survive the horrors of the French Revolution to become one of the history's most famous and enduring business women?

A woman in her 20s, Marie found herself confronted with shocking atrocities. She associated with many influential people of the French Revolution and frequently found herself the recipient of their guillotined heads.

She emerged from those terrible times with troubles of her own, but was able turn her experiences into one of the most enduring and well known tourist attractions in history.

"A remarkable biography of a feisty woman and the turbulent times she lived in."

"An enjoyable look into the life and times of Madame Tussaud, whom we all know and love for making wax death masks... I recommend this to anyone who is interested in this lady."

"Madame Tussaud was such a fascinating person and her wax figures still live on today. Geri Walton really did a thorough research and The book is well written."

This is no dry history book. This is the kind of biography that will have the reader sharing intellectual tidbits at barbecues. I, who have taken more than one class on the French Revolution when obtaining my French degrees, was more absorbed by this book than anything I remember reading on the same subject in college.

Teetering on the Edge

Discover the courage and loyalty of two friends who found themselves on the wrong side of history.  What would you do if your way of life was becoming extinct?

Marie Antoinette became Queen of France at a time when the centuries-old nobility system was on the brink of collapse. Along with her steadfast friend and confidante, the Princesse de Lamballe, at her side, she clung to her lifestyle against insurmountable odds. 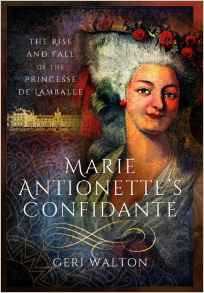 “This is history writing at its very best; vivid detail, characters colourfully brought to life and events clearly described. Anyone with an interest in French history, 18th-century Europe or the main players will find this book hugely appealing.”

“A winning balance between vivid storytelling and well-researched history. Non-fiction is usually at its best when the author’s enthusiasm for their subject emerges clearly but yet remains tempered by scholarly study, and this is the case here.”

Eliza de Feullide was born into a family with high expectations of living an aristocratic life. But when her father unexpectedly died in India during her youth, she was cast into the world to make her own way.
Widely recognized as the most important muse of her cousin, famed novelist Jane Austen, Eliza de Feuillide was a real person who was both alluring and charming to everyone she met as well as loyal and devoted to her family. This book explores how she faced formidable challenges from the turbulent events that were unfolding in male-dominated Europe at the turn of the 18th century. You will see the real-life triumphs and tragedies of this powerful woman who had a lasting effect on others.

Marie Antoinette: Facts About Her You May Not Know

Jane Austen: Her Family, Her Life, and Her Story